I meant to write this post on the 10 Year Anniversary last year.  However, I had my laser eye surgery done and I could barely see a computer screen during at the time.  This picture was taken at ground zero in October of 2003 during our visit to New York that year.  The poster was draped over what seemed to be a condemned building that must have been damaged on that fateful day. 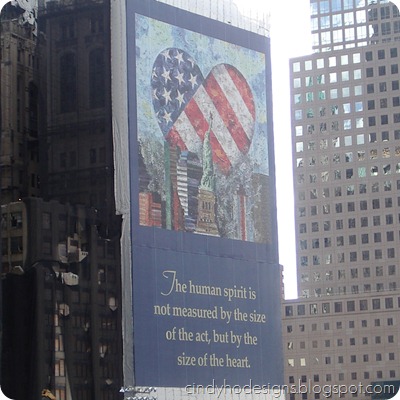 The world was still recovering from that terrible event that happened just over 2 years ago that year.  Security was tight.  We were not allowed to scale to the Statue of Liberty or get within 50 feet from the New York Stock Exchange at that time.

No matter what, we had to visit ground zero, even though it was fenced off.  I saw the towers fall down live on TV that day, but I had no comprehension the severity of the situation and repercussions will follow.  It didn’t seem real.  I didn’t come to the realization until I finally arrived at work.  My desk faced a window with clear sight of the air patch to our airport.  Planes were circling awaiting clearance to land due to the international order to ground all aircraft.

The one thing I got from the people who were affected was the pride and strength of everyone who worked hard to rebuilt but ensure no one ever forgets.  One day I will return to New York, and visit ground zero again.  I want to see the tributes and memorials built for the people lost that day.

Posted by Unknown at 12:00 AM No comments: Links to this post

Email ThisBlogThis!Share to TwitterShare to FacebookShare to Pinterest
Labels: random 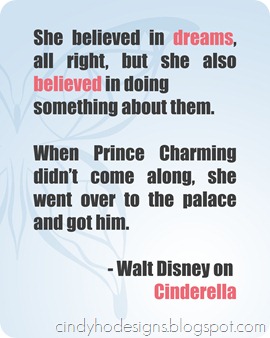 My friend Luanne of Markham Interpretation and Translation Services recently shared the late Walt Disney’s on his perception of Cinderella.

This one struck me as I’m finally working to support my dream to become a designer.  I want to share this with other girls who have a dream but need to know that only she can make those dreams happen.

© Cindy Ho Designs ~ For personal use only.

Posted by Unknown at 12:16 AM No comments: Links to this post